Sorghum bread has excited bread consumers in Nakuru town following the introduction of the product in the market. The bread is baked using composite flour of sorghum and wheat at some ideal ratios. It is not just any sorghum but some special cultivar developed and evaluated at Egerton University by a team of scientists led by Prof. Erick Cheruiyot. It is a product of a concept developed by the team and supported by the then Kenya Agricultural and Agribusiness Project (KAPAP), financed by the World Bank in 2011. When KAPAP project ended, five sorghum lines had been identified as good for baking and one of them was submitted to KEPHIS for the National performance trial. It is the same line, EUS 130 that has been used to market sorghum baked food products. Through the support of the Centre of Excellence in Sustainable Agriculture and Agribusiness Management (CESAAM) t at Egerton University, the introduction and marketing of sorghum baked food products have been made possible. The flour from EUS 130 with a given ratio of wheat flour can produce bread, buns, scones, chapatti and mandazi. Bread is currently available in Woolmatt Supermarket in Nakuru city and soon will extend to other bakeries.

Sorghum is one of the climate-smart crops due to its resilience to low soil moisture which is now a frequent occurrence due to climate change. The team of Scientist from Egerton University have been working on strategies to promote sorghum for food and nutrition security. The team has targeted sorghum for both domestic and industrial needs. So far, sorghum varieties under Egerton name have been released for various uses: they are EUSH1 for malting and brewing, EUSS 10 and EUSS 11 for ethanol extraction and EUS 130 for baked food products. The team in collaboration with scientists from KALRO is currently working on a ‘Super-Feed’ fodder sorghum whose attributes are high energy with sugar-rich stalk, less lignin for improved digestibility and staying green characteristics. 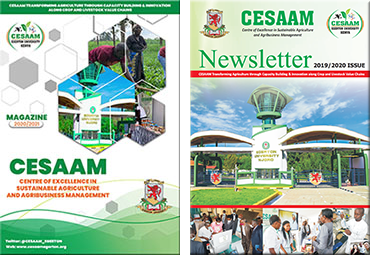